A downloadable game for Windows, macOS, and Linux

Era's Time Delivery Service is a turn-based battle game made for Magical Girl Game Jam 6 on the theme "Service".

Era is a time magical girl who works in a delivery service, boasting she can bring any package to its destination in due time. Today, she must deliver comic pages to a publisher before the deadline, but it is pretty far. Will she be able to make it in time?

In this game, you go through a series of classic-JRPG-style turn-based battles with a party of up to 3 members. Era plays the role of pivot as she can use time skills to advance, delay or swap fighters' turns. She can even rewind a character's state to several turns in the past!

The game has been roughly balanced for the first 2 quests, for a total of 6 battles. You can play 2 characters, Era with time-related skills and Rosemary with magic gun-related skills. The 3rd quest is just made of one battle to demonstrate enemy art (the molemen), but is just plain easy.

There are no dialogues / narration between battles either, so I will let you imagine the story!

You can navigate with the mouse, keyboard or gamepad.

Battle is done with a traditional command box interface, that you can navigate with the keyboard, gamepad or mouse. To select targets for an action, you can also use the mouse (click once to select target, click a second time on selected target to confirm it).

Once you defeat an enemy squad, the next one will arrive and you start the next fight fully restored.

The first version with actual battles: there are several hero skills to use and proper enemy squads to fight. The first 2 quests = 6 battles (where you play 1 and 2 characters resp.) are roughly balanced, while the last battle is not (all the Molemen have 5 HP).

Fixes many usability issues from v0.1.1, and actually show the 3 main characters. Still a sandbox where you can test various skills esp. with Era. Flee to proceed to next fight, but the enemies are still all the same.

A sandbox where you can test various skills with the test character (magenta stickman). Flee to proceed to next fight, but the enemies are all the same. Has many issues like fighter status being hard to read. 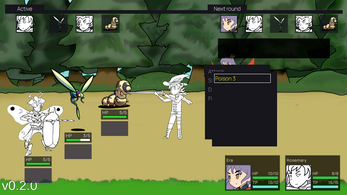 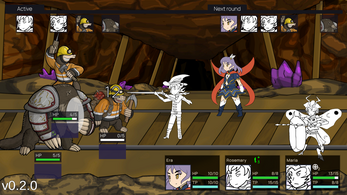