My Ludum Dare 45 entry on the theme "Start with nothing".

It is an adaptation of Monkey Island's "Insult swordfighting", a discipline where two opponents would throw insults and comebacks at each other. Despite the use of swords, the result of the fight would be decided by how fitting the comebacks were during the verbal joust.

In this game there are no swords, just the insults, and it takes place in an office staircase full of hateful employees. You play as a hackathon organizer seeking financial support from his sister, the CEO of the company, who works at the highest floor.

The link with the theme is that initially, the player character knows no insults at all, and must learn them on the go from his opponents.

The game is still in development, so the experience is still a bit raw: you may be overwhelmed by new quotes, and it's not clear what insult works on whom, you'll have to figure out most of it yourself.

I will be working on gameplay/balance and UX improvements in the incoming weeks.

v0.1: Ludum Dare 45 release. The current game has almost no interactions as you can only select an empty dialogue line. It consists mostly of a static screen, but was uploaded as such to have something to show for the Ludum Dare. You can get a snapshot on the GitHub release page.

Insults are named "attacks" and comebacks are named "replies". They are both referred to as "quotes" (despite not being actual movie quotes).

This game was made with PICO-8, so there are different ways to play:

The game is played with the keyboard.

In the web version, you can also click on the NES gamepad icon on the right at anytime to see the mapping between keyboard and PICO-8 buttons.

At every floor, you must fight a certain type of office worker. Fights are turn-based, with characters alternating between saying the attack and saying the reply.

When you play the role of replier, you must find a reply matching the attack among those you have learned. Depending on how many replies you know, there may be no fitting answer, one, or several. You can discover matching replies by remembering your opponents' replies when they worked, or by experimenting yourself!

In addition, some replies are stronger than others for a given attack (based on the affinity between the sentences, and peskiness). So, even if you know a fitting one, it's worth looking for other combinations!

Your character will learn new attacks and replies when hearing them from their opponents. But you start with nothing.

I introduced the following innovations compared to Monkey Island: 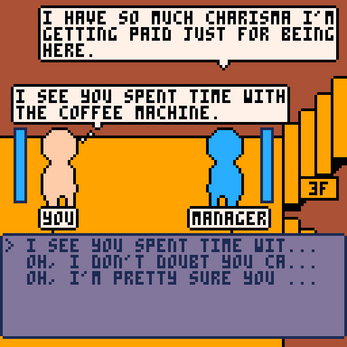