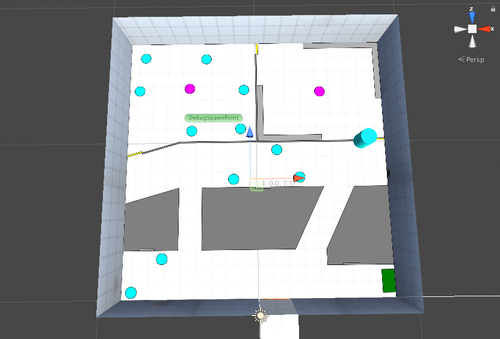 This is a postmortem after the NaNoRenO following the template suggested by Nai on DevTalk+ (see description of the workshop, which contains a Discord invite that may interest you if you're a Visual Novel developer).

Were you able to finish your NaNoRenO submission on time?

Only an alpha version with the system working and enough gameplay hints to finish the game, but lacking a lot of content and narrative explanations. Also, I submitted it at like 4am after the deadline because I had some critical end-game-breaking bugs to fix.

What inspired your project?

My references are digital experiences like HOTEL by Benjamin Nuel, computer-humor comics xkcd and my own experience with computer work, as a hobby and within a company.

Where did you get the idea?

Last year, I tried to make an actual fully-fledged story with solid world building, characters and pacing (mostly following the steps from Jon Truby's The Anatomy of Story). Creating the characters was fun, but making the whole story and theme consistent, while researching a huge amount of information on the 18th-19th century proved exhausting. In the end, I barely got the time to actually make the Visual Novel (I opened Ren'Py maybe one week before the deadline) and ended up with a very short demo with proto assets.

So I decided that the next time, I would make a simple comedy instead. A few weeks before the start, I also decided to go more systemic and let the player around some office where I would gradually add characters and skits, as this approach would allow me to always have something playable and never stress about the deadline (sic), but still add more content as time would go.

What are you particularly proud of?

First, I started working on the prototype from Day 1, thanks to the need for an actual system, and the fact I had pondered over the concept in advance.

Second, I think it's the first time I've actually built and released a 3D level. I enjoyed the fact that, compared to the platformers I used to work on, the character is walking slowly so I could create environments with realistic sizes. I also drew a few floor plans.

Finally, I'm just satisfied with the fact that this time, I released a game where the story is playable from start to end.

What do you think is the most unique thing about your submission?

The player can move around in a 3D office and must fulfil simple tasks while witnessing short skits... If it was an Adventure Game or Escape Room Jam, the interactions would be very poor, but for a Visual Novel it's not so common.

What do you think could have gone better?

I wanted to make something simple this year, but I ended with too much again:

What advice would you give to next year's participants?

Scope carefully, and balance your work between the different parts of the game. Better get a good vertical slice than an average horizontal slice.

A free-roaming office comedy in a digital communication company